He has just checked off a big bucket list item: premiering five new jazz compositions on the university stage.

What You Need To Know

Shynett is generally one who avoids the spotlight, preferring to spread his love of jazz music from an ensemble, where he plays trombone. However, the pandemic gave him the opportunity to branch out into an area that isn’t something he usually has time for amid all the responsibilities of teaching.

“Mostly, I’m known as a performer, and I have been for many, many years and maybe people would probably describe me as a dabbler, ‘Well he’s a dabbler – he’s not really a serious composer,’ and I still sort of feel that way,’” Shynett said. 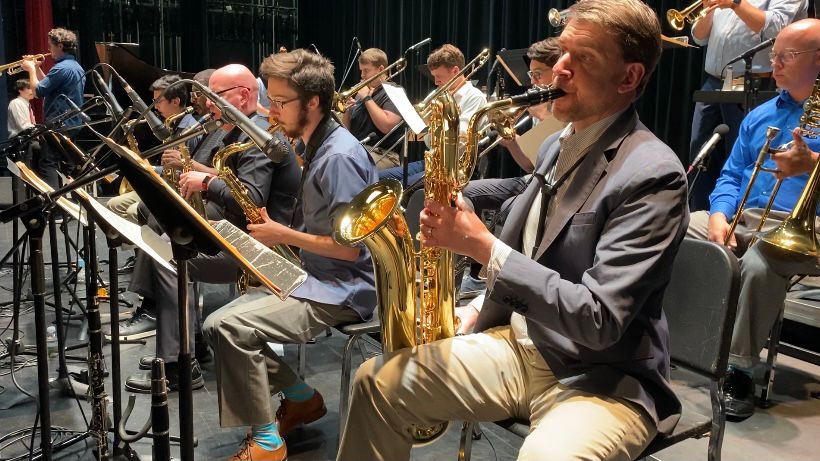 The pandemic was a dry time for the music world, and to keep his skills sharp and passion alive, he poured himself into getting the chords running around in his head onto paper.

“Sometimes, you’ll get an idea from a writing standpoint compositionally that just sort of gnaws at you,” Shynett said. “The only way to get it out is to just write it out and then it sort of takes on a life of itself.”

His passion for jazz started at an early age, as he enjoyed his father’s collection of old records. It grew from there until he found himself as a proponent for jazz appreciation in the next generation – working to broaden his students’ horizons on music.

Jazz is a genre of inclusion, being the intersection of multiple different styles and cultures, and Shynett hopes to expand that message to the community as well. He said it’s something that is uniquely American and deserves recognition for the role it has played in developing today’s culture and current music.

“Jazz is great because it brings people together and from a historical standpoint, I think this was an instance where different races of people could come together and embraced each others’ culture and their own aesthetics without judgment or preconceptions,” Shynett said.

Bassist Endea Owens Cooks Up Jazz For The Community